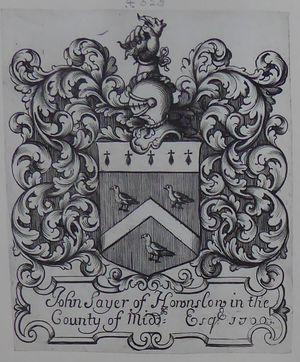 Son of Henry Sayer of London, skinner. Henry acquired estates in Hounslow, Middlesex and Biddlesden, Buckinghamshire which John inherited in 1686. He was murdered by his wife's lover in 1712.

Sayer used an engraved armorial bookplate dated 1700 (Franks 26192/*525); the extent and disposition of his library are not known.

Retrieved from ‘https://www.bookowners.online/index.php?title=John_Sayer_d.1712&oldid=23634’
Categories:
This page was last modified on 22 September 2022.
Content is available under CC BY-NC 4.0 unless otherwise noted.