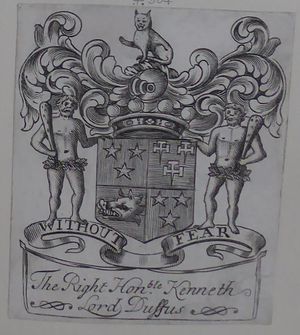 Son of James Sutherland, 2nd Lord Duffus of Duffus Castle, Moray, from whom he inherited the title and family estates in 1705. At this time he was serving in Queen Anne's navy as a captain. In 1711 he was injured when he ship was involved in a skirmish with French privateers.

He voted for the Union in 1707 but did not accept the Hanoverian succession. After involvement in the 1715 Jacobite uprising, he fled to Sweden, and the title and estates were attainted and forfeit to the Crown. He then served as a vice-admiral in the Russian navy.

The title was formally restored in the 19th century.

Sutherland used two engraved armorial bookplates, made at different times (Franks 28570, *504); the extent and disposition of his library is not known.

Retrieved from ‘https://www.bookowners.online/index.php?title=Kenneth_Sutherland&oldid=19460’
Categories:
This page was last modified on 25 April 2021.
Content is available under CC BY-NC 4.0 unless otherwise noted.