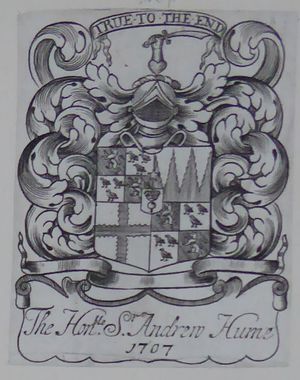 Younger son of Patrick Hume, 1st Earl of Marchmont, who was in exile in The Netherlands from 1684. He was educated at the University of Utrecht and became an advocate in 1696; the family returned to Scotland during the reign of William III and was restored to favour. Hume was knighted in 1696, and was Member of Parliament for Scotland 1707-1708; he held a number of administrative posts in Scotland and became a session judge as Lord Kimmerghame in 1714, having inherited an estate at Kimmerghame, Berwickshire from his cousin in 1710.

The extent and disposition of his library is not known.

Retrieved from ‘https://www.bookowners.online/index.php?title=Andrew_Hume_1676-1730&oldid=21231’
Categories:
This page was last modified on 29 November 2021.
Content is available under CC BY-NC 4.0 unless otherwise noted.