Born at St James's Palace, London, the first surviving son of Charles I (1600–1649) and Henrietta Maria (1609–1669) and brother of James, future James II. He became duke of Cornwall and Rothesay upon his birth. Charles’s early years were characterised largely by the English civil war, most of which he spent with his father. He left England in 1646 due to the growing threats to his safety, settling in France where he remained until his restoration in 1660 at which he was created king of England, Scotland, and Ireland. Charles is generally regarded as one of the most popular British monarchs largely due to the hedonistic nature of his court and personal conduct, perceived initially as liberating the country from the constraints of the puritan protectorate that preceded him. However, Charles suffered his fair share of criticism and crises. The Second Anglo-Dutch War was the primary foreign policy issue of his early reign and he was, in the late 1670s and early 80s, increasingly accused of an overly sympathetic attitude towards Catholics amidst rising religious tensions and, as a result of his conflict with parliament over this issue, absolutism. 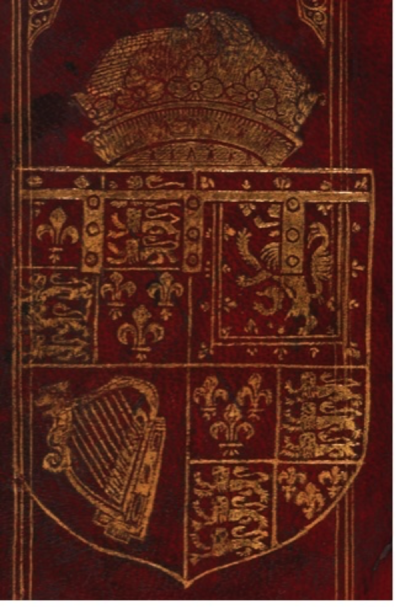 Charles bought the library of John Morris, which consists of over 1400 titles, in 1662. Morris’s books are predominantly French, Italian, and Spanish works in the humanities and Birrell cites a ‘strong historical bias’. Charles’s own library amounts to 1,000 titles ‘rich in history, and some science’ and includes forty-seven of the three hundred and fifty books that James acquired from the library of Isaac Casaubon. The Royal Library was bequeathed by King George II to the British Museum in 1757; many of these books are now at the British Library. Birrell notes that half of Charles’s books date from the sixteenth century and that there is a strong possibility many of these were already in the Royal Library before Charles came to the throne, and were rebound in his bindings after the restoration.

British Armorial Bindings attributes forty-one stamps to Charles, and notes that some were used previously by Charles I and Henry, prince of Wales. Birrell has commented on the simplicity of Charles’s bindings in comparison to those of his royal predecessors, remarking that ‘the absence of the royal arms as a centrepiece [...] is most unusual on a book of English royal provenance’, and that such minimalism ‘reflects the ethos of the Royal Society: clear, simple, natural, easy’.

Retrieved from ‘https://www.bookowners.online/index.php?title=Charles_II_1630-1685&oldid=17767’
Categories:
Content is available under CC BY-NC 4.0 unless otherwise noted.