Born at Dunfermline Castle, Scotland, the third child of James VI and I and Anne of Denmark and younger brother of Henry, prince of Wales and Elizabeth, future electress of the Palatinate and queen of Bohemia. Made duke of Albany at his baptism and duke of York in 1605. He became heir apparent following Henry’s premature death in 1612. In 1616 he was created prince of Wales and in 1625, following his father’s death, became king of England, Scotland and Ireland. He married Henrietta Maria in the same year, with whom he had two children: Charles, future king Charles II, and James, future king James II. Charles’s reign was notoriously tumultuous, leading as it did to the English Civil War 1642-45 and Charles’s eventual execution for high treason in 1649. 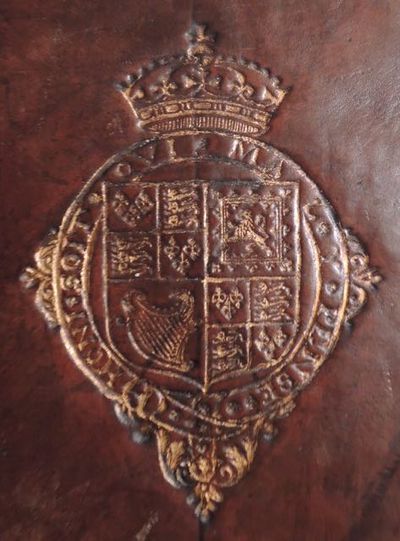 As ‘every book belonging to Charles I is [...] a relic of a martyr’, so ‘there are many books around with bogus claims to Charles’s ownership’ (Birrell). Charles inherited prince Henry’s books which, passing into the Royal Library, were bequeathed by King George II to the British Museum in 1757 and many are now in the British Library. Charles was, like his father, a collector of ephemera, and the Royal Library ‘contains a striking number of pamphlets, pro and contra, on the abortive Spanish marriage’ (Birrell). He also notably owned three Little Gidding harmonies and constructed a privy gallery at Whitehall which contained ‘a cabinet room to hold his rare books, sculptures, curiosities, and a large collection of antique medals’ (ODNB).

British Armorial Bindings attributes thirty-three stamps to Charles I, noting that he used the same as his brother, Henry. However, the use of royal armorial binding does not necessarily point to personal royal ownership. Charles also annotated many of his books, often with the intention of providing corrections. His copy of the 1640 edition of Francis Bacon’s Advancement of Learning contains manuscript additions in which Charles ‘tries every time to cap Bacon’s apophthegms with one of his own’ (Birrell), and he similarly suggests alterations to Beaumont and Fletcher’s plays in his copy of the 1647 folio. Based on this emerging pattern, Birrell has suggested that the notes Charles made on his copy of Shakespeare’s second folio do not indicate his favourite characters as often thought but are, in fact, alternative titles.

Retrieved from ‘https://www.bookowners.online/index.php?title=Charles_I_1600-1649&oldid=17774’
Categories:
Content is available under CC BY-NC 4.0 unless otherwise noted.