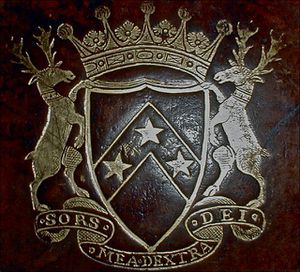 Second son of Robert Kerr, 1st Earl of Ancram, a courtier and politican under Charles I, who was forced to flee abroad where he died in poverty in 1654. His education included travelling in Europe in the late 1630s. His elder brother, William became Earl of Lothian and Charles inherited the Ancram title on his father's death. Despite his Scottish title he spent much of his time, after the Restoration, in London, and he was MP for Wigan 1661-85, where he was an active parliamentarian and politician. He was out of favour after William III came to the throne and like his father he died in rather impoverished circumstances.

Kerr's father Robert is noted as a man with many literary interests and connections, and many books survive with Charles's armorial bookstamp, now widely scattered; the Armorials Database suggests that the library may have been dispersed between 1658 and 1664. A copy of R. Bellarmine, De controversiis Christianae fidei, 1620, now M.1.9-10 in Salisbury Cathedral Library, most unusually has the Kerr armorial stamp gilt-tooled on top of the earlier armorial of Thomas Smythe, Viscount Strangford, which may originally also have been gilt but with the gold scraped off.

Retrieved from ‘https://www.bookowners.online/index.php?title=Charles_Kerr_1624-1690&oldid=23626’
Categories:
Content is available under CC BY-NC 4.0 unless otherwise noted.