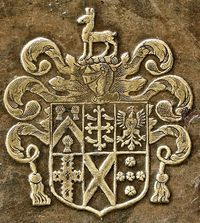 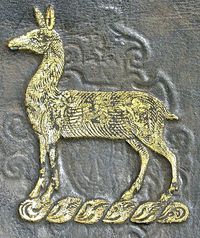 Son of John Hatton, a cousin of Sir Christopher Hatton (ca.1540-91), Lord Chancellor. He inherited Kirby Hall, Northamptonshire, which had been bought by Lord Chancellor Hatton during his lifetime; it became the main seat of the Hatton family after this Sir Christopher (who was knighted in 1603) sold the other family estate at Holdenby, Northamptonshire.

Like his namesake the Lord Chancellor, and his son Christopher (who became 1st Baron Hatton in 1643), this Christopher employed armorial binding stamps, and numerous books survive using one of four such stamps attributed to him. We do not know the extent of his library; the inventory made at Kirby Hall after his death does not mention books or a study/library room, but notes over 40 maps.

Retrieved from ‘https://www.bookowners.online/index.php?title=Christopher_Hatton_d.1619&oldid=23638’
Categories:
This page was last modified on 2 December 2022.
Content is available under CC BY-NC 4.0 unless otherwise noted.