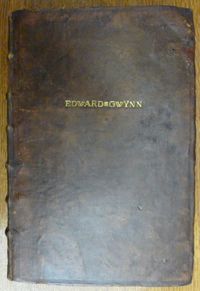 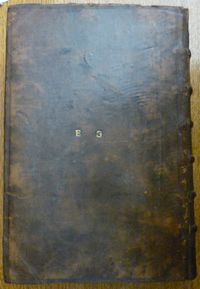 Son of Thomas Gwynn of London. Admitted to the Middle Temple 1610, being then noted as a member of Furnivall’s Inn. Little else is known of his life, which is assumed to have been spent in routine legal practice; his name appears in records from time to time, renting chambers with his fellow lawyer Alexander Chorley in 1626, being appointed an Utter Barrister in 1631. He corresponded with Sir Simon Archer.

Many books from Gwynn’s library survive today, widely scattered, and he is thought to have owned at least several hundred volumes. His name has become well-known in book collecting history, partly for his distinctive name-stamped bindings (see below), and partly because he owned some particularly celebrated books, including a copy of the 1512 Wynkyn de Worde Helyas Knight of the Swan on vellum, and most notably a set of nine early Shakespeare quartos bound together (now in the Library of Congress, and the Folger Library, respectively). Other surviving books suggest that his collection included a wide range of subject coverage, typical of its time, with many continental imprints as well as English ones. The Folger Library's Folgerpedia includes a list of all known surviving books from Gywnn's library. He bequeathed his books to Alexander Chorley (with whom he seems to have been associated throughout his life), who appears to have sold them soon afterwards; at least one Gwynn book was acquired by Roger Twysden in 1652. Examples: see the list maintained at the Folger Library, in the Sources below.

Most of the known Gwynn books are identifiable from his preference for having his name gilt-stamped on the bindings, typically early 17th-century plain calf with blind fillets, with “EDWARD*GWYNN” on the upper cover and “E G” on the lower.

Retrieved from ‘https://www.bookowners.online/index.php?title=Edward_Gwynn_d.1645&oldid=23666’
Categories:
This page was last modified on 24 September 2022.
Content is available under CC BY-NC 4.0 unless otherwise noted.