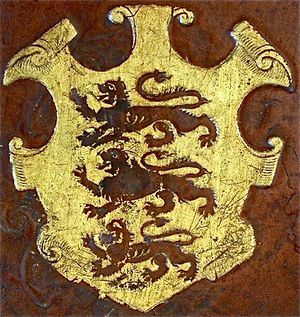 Son of George Carew, Dean of Bristol and later of Exeter. Attended Broadgates Hall, Oxford 1564-73; MA 1589. He spent the early part of his career as a soldier, primarily in Ireland; sheriff of County Carlow 1583, master of the ordnance in Ireland 1588. Participated in the Earl of Essex's expeditions to Cadiz in 1596 and the Azores in 1597. Lord President of Munster 1600-04, where he successfully suppressed a rebellion. After James I's accession he was based more in England, where he held a number of state positions, including master of the ordnance (1608) and governor of Guernsey (1610). he was made Baron Carew of Clopton in 1605, and Earl of Totnes in 1626. He retained an involvement with Irish affairs, including the plantation of Ulster.

Surviving books (well over 50 can be traced, widely distributed around many libraries) show that Carew had a substantial library. He had books in English, Latin, French, Italian and Spanish including numerous titles on military theory and practice. He had antiquarian interests relating particularly to Irish history, most of which are now divided between the Bodleian and Lambeth Palace Library. He was a friend and patron of contemporary antiquaries, including William Camden, Sir Robert Cotton and Sir Thomas Bodley. In his will, he bequeathed all his books and manuscripts to Sir Thomas Stafford (d.1655, reputedly his illegitimate son), after whose death they were sold by his widow to the London bookseller Cornelius Bee, though the manuscripts are said to have been given or sold earlier by Stafford to Archbishop Laud. Examples: BL C.68.c.5, C.66.h.2; CUL T.3.5, Rel.c.58.1; Bodleian 4to F.13.Jur.Seld., 4to V.17.Th.Seld; Durham UL Cosin R.3.1; Lincoln College, Oxford N.9.31. 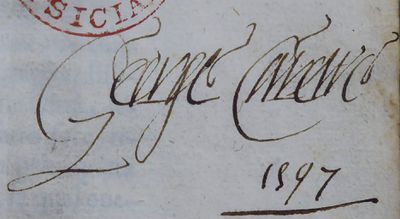 Carew used five armorial binding stamps, all showing his main coat of arms, one of which is regularly found on books from his library. Many of his bindings are in vellum, otherwise in calfskin, and the arms are often handpainted to show the correct heraldic tinctures. He sometimes inscribed his titlepages with his name and date of acquisition, but his books are not typically otherwise annotated. A series of capital letters (A to D) sometimes found on the flyleaves or titlepages of his books seem to indicate a simple shelfmarking system.

Retrieved from ‘https://www.bookowners.online/index.php?title=George_Carew_1555-1629&oldid=18671’
Categories:
Content is available under CC BY-NC 4.0 unless otherwise noted.