Difference between revisions of "Humphrey Humphreys 1648-1712" 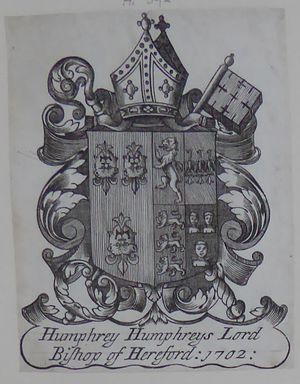 Born at Hendre Isa, Merioneth, son of Richard Humphreys, a royalist army officer. BA Jesus College, Oxford 1669, MA and fellow 1673. Rector of Llanfrothen 1669; he held other Welsh livings and became Dean of Bangor in 1680. Bishop of Bangor 1689, of Hereford 1701. He was an exponent of the Welsh language, and a keen student of Welsh antiquities, supporting Welsh bards and writers; he was also a major supporter of the Society for Promoting Christian Knowledge in north Wales.

Humphreys was noted as a collector of early Welsh manuscripts, and for his work on early Welsh pedigrees; his motives seem to have been largely focused on proving the credentials of the early British church. He used an engraved armorial bookplate dated 1702 (Franks *592); the extent and disposition of his library is not known.

Retrieved from ‘https://www.bookowners.online/index.php?title=Humphrey_Humphreys_1648-1712&oldid=21235’
Categories:
This page was last modified on 29 November 2021.
Content is available under CC BY-NC 4.0 unless otherwise noted.