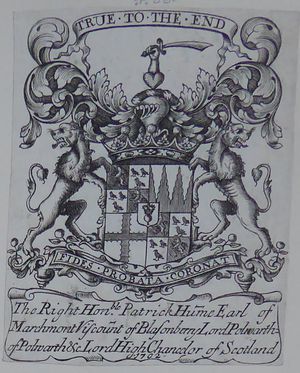 The eldest son of Sir Patrick Hume of Polwarth, 1st baronet (d. 1648). He studied law in Paris and in 1663 was appointed a justice of the peace in Berwickshire. He served as a member of the Scottish Parliament and was commissioned as captain of the horse in the Berwickshire militia in ]]1668. In 1675 he was involved in opposition to some of the policies of Charles II and was imprisoned for several years in Edinburgh Castle, Stirling Castle and elsewhere.

In 1683 he went into hiding having been accused of involvement in the Rye House Plot. He went into exile in Utrecht. Following the death of Charles II, he was involved in the unsuccessful rebellion of 1685. He escaped back to the continent and his estates were forfeited. In 1688 he accompanied William of Orange to London and was closely involved in the negotiations for offering the Scottish crown to William. In 1690 his forfeiture was reversed and he was made Lord Polwarth, becoming chancellor of Scotland in 1696 and created earl of Marchmont in 1697.

Under Queen Anne he supported the Union of England and Scotland but was not elected one of the representative Scottish peers in the new Parliament.

Franks 15696/*560 Hume, The Right Honble. Patrick, Earl of Marchmont, Viscount of Blasonberry, Lord Polwarth of Polwarth, &c., Lord High Chancellor of Scotland. 1702.
The extent and disposition of his library is not known.

Retrieved from ‘https://www.bookowners.online/index.php?title=Patrick_Hume_1641-1724&oldid=21232’
Categories:
This page was last modified on 30 June 2022.
Content is available under CC BY-NC 4.0 unless otherwise noted.