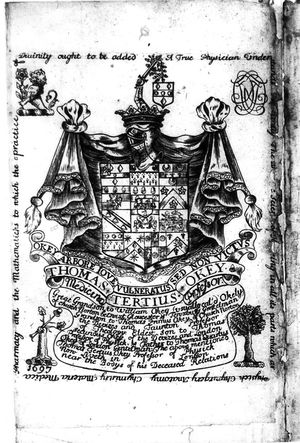 Eldest son of Thomas Okey, a London apothecary, and a member of a west country dissenting family. In his 1697 bookplate/trade card he described himself as a professor of physick, living in London, and he claimed a similar title ("medicinae professor") in an engraved portrait by Michael van der Gucht which he apparently commissioned in 1703. The extent of his qualifications, and his subsequent career, are uncertain; his references to himself as Thomas Tertius Okey, and to other members of the family as Thomas Secundus, Thomas Quartus, etc, suggest a degree of self-aggrandisement. In his will, made in 1704 and proved in February 1711/12, he described himself as a surgeon in an army regiment of foot, and a portrait of 1708, apparently made in Connecticut and referring to Thomas Octavius Okey, is apparently this man.

The Franks Collection preserves a titlepage and flyleaf from a copy of The Athenian oracle, 1703, with an elaborate engraved plate which may have been intended for use as a trade card as much as a bookplate; it has Okey's many-quartered arms, a lengthy inscription, and the date 1697 (Franks 22256). This fragment also preserves the inscription "Thomas Tertius Okey medicinae professor" on the verso, dated 1703/4. In his will, Okey bequeathed "all my bookes and household stuff" to his wife and two children, Thomas and Jane. The extent of his library is not known.

Retrieved from ‘https://www.bookowners.online/index.php?title=Thomas_Tertius_Okey_b.1674&oldid=23658’
Categories:
This page was last modified on 23 September 2022.
Content is available under CC BY-NC 4.0 unless otherwise noted.