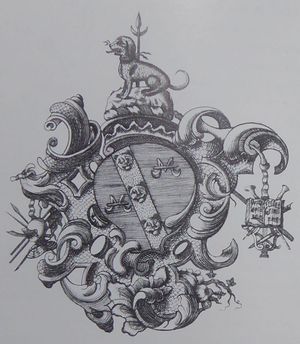 Son of Thomas Hunt of West Lavington, Wiltshire, a member of a long-established family there in "the comfortable circumstances of the middle ranks of the country gentry" (Crittall). Matriculated at Trinity College, Oxford 1714, but did not graduate; in 1716 he was admitted at the Middle Temple. In 1715 he inherited property and estates from his uncle William Grubbe, adding to his prosperity. The rest of his life seems to have been spent largely as a country gentleman, playing various roles in local administration; he was a JP from 1744, having earlier been made a major in the Army, and a commissioner for land tax, and army recruiting. His activities as a magistrate are recorded in detail in the notebook he kept 1742-49, which has been transcribed and edited.

Hunt inherited books from his uncle and continued to develop a library of his own; his account book for 1726-42 (Wiltshire Record Office 1553/69) includes references to book purchases. He used two anonymous engraved armorial bookplates (Franks 15751-2), incorporating both the musical and military interests which were part of his life. His will has no specific mention of books; they would have been part of his "household goods and furniture" left in trust for his only son Thomas Hunt (1736-72).

Retrieved from ‘https://www.bookowners.online/index.php?title=William_Hunt_1697-1753&oldid=21240’
Categories:
This page was last modified on 29 November 2021.
Content is available under CC BY-NC 4.0 unless otherwise noted.