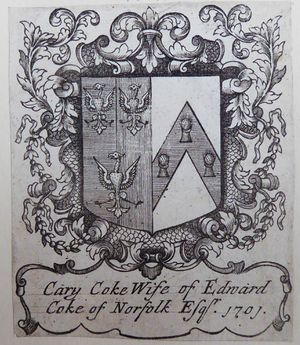 Daughter of Sir John Newton of Barrs Court, Gloucestershire. In 1696 she married Edward Coke who had inherited the hall and estate of Holkham in Norfolk; their son Thomas (1697-1759) became 1st Earl of Leicester. Cary and her husband were a bright and fashionable young couple, who died heavily in debt despite their youth; their patronage and enthusiasm for the stage is signified by the dedication of Mary Pix's play Queen Catherine to Cary in 1698.

Both Cary and Edward acquired books and in 1701 they each had a dated bookplate made. There are ca.120 books still at Holkham today with her plate; half are theological and devotional, with some earlier 17th-century authors like Preston and Sibbes represented alongside more contemporary writers like Allestree, Hammond and Stillingfleet. There is also a wide spread of history, conduct books, current affairs like the The Turkish Spy, and literature, including Boccaccio, Butler, Cowley, Killigrew, Philips, Rochester, and Spenser. She had several classics in translation and all her books were in English. As well as the books at Holkham there are ca.30 volumes of contemporary plays, uniformly bound up around the beginning of the 18th century and bookplated with either hers, or his; they are all now in the Bodleian Library as part of a tranche of books from Holkham bought in 1955. Examples: Bodleian, shelf marks beginning Holk, and at Holkham Hall.

Her books typically have her bookplate, and an inscription with a number suggesting the maintenance of an acquisition or shelving sequence.