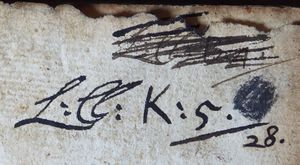 The form taken by many 17/18th century Bridgewater Library pressmarks, from which their provenance can be recognised (G. Burnet, Romes glory, 1673, Private Collection)

Son of John Egerton, 2nd Earl of Bridgewater, from whom he inherited the title and estates in 1686. His education took place partly at the Inner Temple, which he entered in 1673. He held various local administrative offices and was MP for Buckinghamshire in 1685. he supported the accession of William III and was made a privy councillor in 1689, President of the Board of Trade in 1695, and First Lord of the Admiralty in 1699.

Egerton inherited the library which had been built up since the time of his great-grandfather Thomas Egerton, and added to it himself; this family library continued to be built up over succeeding generations and became known as the Bridgewater Library. It began to be dispersed in the 19th century and a significant portion of it (ca.4400 volumes) was purchased by Henry Huntington in 1917, and is now in the Huntington Library in California.

Bridgewater Library books can sometimes be recognised from their distinctive early pressmarks.

Retrieved from ‘https://www.bookowners.online/index.php?title=John_Egerton_1646-1701&oldid=20600’
Categories:
This page was last modified on 18 July 2021.
Content is available under CC BY-NC 4.0 unless otherwise noted.