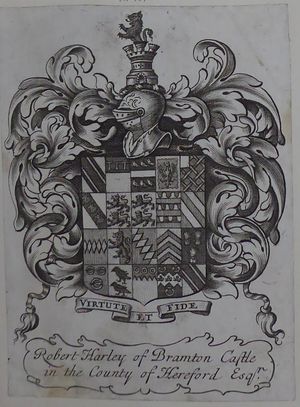 Born in London, son of Sir Edward Harley of Brampton Bryan, Herefordshire. Initially educated at a presbyterian school, he was admitted at the Inner Temple in 1682, but did not become a barrister. After supporting William III's invasion he became MP for Tregony in 1689. He became an active parliamentarian and effective leader of the whigs by the mid 1690s, while charting a nimble political path between various factions. He was elected Speaker of the House of Commons in 1701 and was a senior government figure during much of Queen Anne's reign, despite a period out of office in 1708. He was made Lord Treasurer and Earl of Oxford and Mortimer in 1711, and he is sometimes described as England's first Prime Minister. He was dismissed by Anne shortly before her death in 1714 and was never in favour under George I; he was impeached and imprisoned in the Tower, 1715-17.

While Harley is remembered as a key political figure of his time, he is also celebrated as the founder of one of the most famous private libraries of the early 18th century, which was further developed by his son Edward, 2nd Earl, and whose manuscripts became one of the foundation collections of the British Museum/British Library. He acquired books all his life, and was noted for his learning; he inherited some books from the family library at Brampton Bryan, but what had existed there before the Civil War was largely dispersed then.

He is particularly noted as a collector of manuscripts, and he bought a number of sizeable collections en bloc from others. In 1705 he purchased ca.600 manuscripts previously owned by Sir Simonds d'Ewes, and the following year bought the manuscripts of Edward Stillingfleet (whose printed books went to Marsh's Library. Other important collections ingested by Harley include manuscripts from Henry Worsley (1712), Jean Aymon (1712 - many of these were stolen from the Royal Library in Paris, and later returned by Harley's son), Robert Burscough (1715), John Johnson (heraldic manuscripts, 1716), and Matthew Hutton (antiquarian collections, 1716). During the last 10 years or so of his life, many important acquisitions were made from continental Europe. The development of the library was overseen by Humphrey Wanley, who was employed as librarian by Harley from 1703 onwards, and whose edited diaries contain a great deal of detailed information on the way the library was built up. The Introduction to the edited version of the diaries also includes a detailed account of the assembling, and contents, of the Harleian Library.

After Harley's death, the library was inherited and further developed by Edward, the 2nd Earl, after whose death the printed books were sold to Thomas Osborne for £13,000, while the manuscripts were sold to the nation in 1753 for £10,000; both sums were nominal and much less than the originals had cost. In 1715 it was estimated that the 1st Earl owned ca.3000 manuscripts, 1000 charters/rolls, and 13000 manuscript deeds. 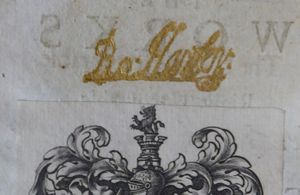 Harley's gold ink stamp, from the title leaf verso of a copy of H. Booth, The works, 1694 (private collection)

Harley used two engraved armorial bookplates (Franks 13802/*181, 13803/*338). He also regularly used a facsimile signature stamp, impressed in gold on the title leaf versos of his books. Although he owned many finely-bound books, "Harleian bindings" are associated more with the 2nd Earl than the 1st and are referred to under that entry.

Retrieved from ‘https://www.bookowners.online/index.php?title=Robert_Harley_1661-1724&oldid=19686’
Categories:
This page was last modified on 3 May 2021.
Content is available under CC BY-NC 4.0 unless otherwise noted.